I was looking for a photo of a cruck frame (a particular type of truss where the timbers are curved) for a client and came across these. The project was actually featured on the BBC1 show 'To Build or Not to Build' and the owners, who designed and self built most of this house, kindly sent us some photos taken just as they were moving out - to build another!
I hadn't really absorbed the fact that the house was actually a 'bungalow' until I revisited the images - I think the low ridge was a planning requirement (as the house replaced an old bungalow).
The owners have cleverly designed a house that looks 'low' from the outside but vast and lofty internally. Many of the features/details/finishes are not typical 'Border Oak' but it is always good to see how different the projects can be.
Now my family like to tease me about my snobbery - embarrassingly I have been known to describe the location of my home city (hereford) as 'just north of Cheltenham', and I would think nothing of driving a 10 mile round trip to find organic milk - which leads me to the question...........is this house a bungalow or a single storey dwelling? 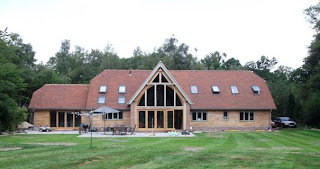 from the rear elevation you can see that there are rooms in the roof space - there are roof lights rather than dormer windows so that the planners were happy it was a 'like for like' replacement. 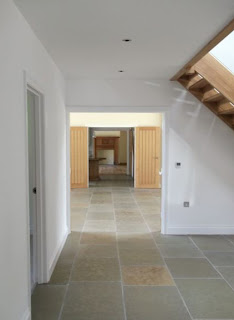 Most of the rooms have double door openings - which enhances the feeling of space and allows the rooms to flow - great for parties! 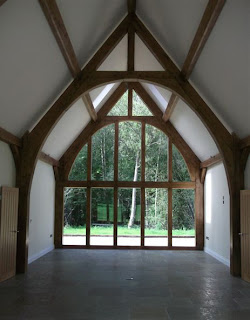 And two feature spaces have vaulted ceilings with 'cruck' frames and glazed gable ends - to make the best use of the plot and turn a planning 'restriction' into an asset. 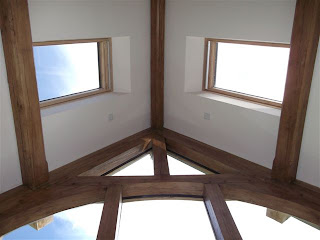 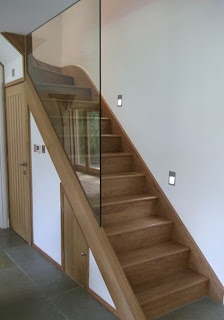 There are two staircases in the house - and both have glass balustrades. Personally I am not sure about the glass - some times I like it some times I worry it might be a passing fad (what do you think?). And the small cupboard under the stair is probably only useful for people under 2 ft 6? 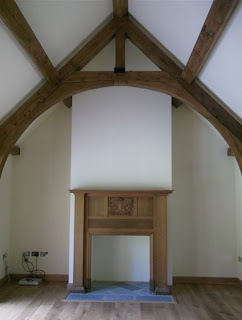 A reclaimed art deco fire surround under the other cruck frame.........I think I would have chosen something a bit less ornate (maybe stone) or alternative a modern interpretation. But I do love the height of the room and the light flooding in from a wall of glass just out of shot 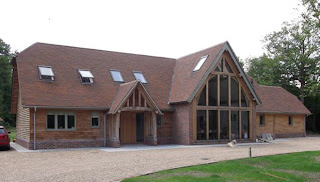 And from the front, a single storey dwelling complete with Border Oak porch.
p.s I will try to think of more examples of my snobbery to amuse you all.
Posted by merry at 04:43