I am sorry for not updating this for a few days - I had the most crazy of days last Friday and have also been busy busy busy at work (actually in the real office, with real other people and officey stuff like photocopiers - oooh!)
On Friday I drove to West Sussex (had to leave at stupid o'clock and got back at 10 past silly) to style a photoshoot of a modern barn style house Border Oak built a few years ago. Sounds quite straightforward so far? Well, of course,  nothing in Merry World goes according to plan but despite the drama of the day these are the pics.
The house was seriously good for photos  - open plan, contemporary, beautiful light, cool details  - and I could have spent an age there getting dozens more but I guess some days are just not meant to be.............
I would love to hear your thoughts on the house though so do get in touch. The Pearmain Cottage brochure is coming together too so I will post an update on that soon as well as some mini interviews from the other real people at the real office who get to use real photocopiers every day of the week. 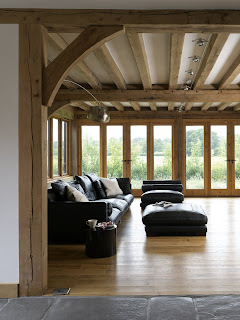 a wall of glass overlooking a beautiful field  - which made fabulous light and must be spectacular on a summers evening of for a party.......... 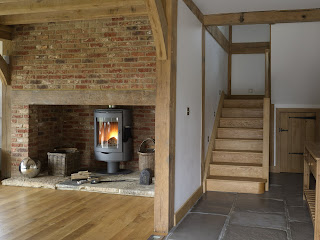 Although the main rooms were open to each other there was just enough subdivision to articulate the spaces - I love the way the stairs is in the sitting room but effectively separate. V. clever I thought 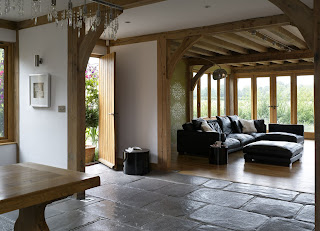 the end of the open 'corridor' had two large barn doors which made the house feel connected to the outside and worked well with the overall 'L' shape of the house. 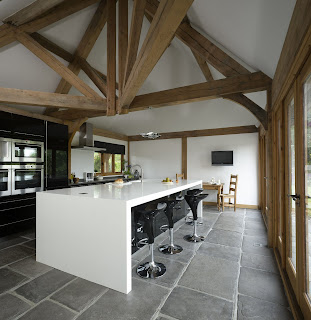 As the house was designed by an architect rather than Border Oak, there are some interesting contemporary interpretations - such as the vaulted ceiling in the kitchen and master bedroom. Its always good to see other peoples ideas and to take a fresh look I think. 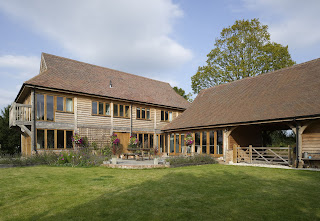